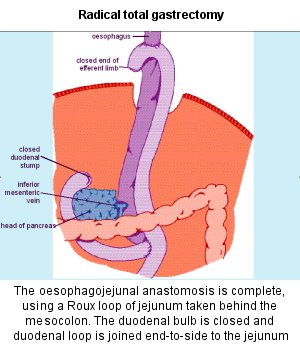 Malnutrition is one of the main complications following gastric cancer. Total gastrectomy (TG), by altering the physiology of digestion and damaging the delicate mechanisms at the gastro-oesophageal junction, will inevitably lead to malnutrition.

Amongst the mechanisms involved in the aetiology of ‘protein energy malnutrition’ include:

This can manifest as severe weight loss compromising quality of life, often leading to an unnecessary loss of muscle mass with impaired mobilisation and increased morbidity.

Among patients with cancer, those with gastrointestinal tract malignancies have been shown to have the worst nutritional status. Unpublished data from our unit showed mean percentage weight loss pre admission in gastric cancer patients of 8.1% (SD 7.9%). These figures are similar to findings in other centres. The degree of preoperative weight loss has been shown to be directly related to postoperative morbidity and mortality.

Traditionally, TG patients were kept fasting or given TPN (total parenteral nutrition) because of fear of oesophagojejunal anastomosis, oral intake being forbidden until all risk of anastomotic leakage had passed (8-12 days). Since food intake will not be normal for some time after this, even most well-nourished patients will suffer postoperative malnutrition unless some form of alternative feeding is instituted.

The use of nutritional support for malnourished patients in the post operative period has been shown to decrease weight loss and to improve recovery.  Enteral feeding via a percutaneous catheter jejunostomy, placed at conclusion of laparotomy, is a safe and effective means of administering enteral nutrition. This procedure rules out the risks of aspiration or anastomotic leakage which are possible with nasojejunal tubes.

The presence of a jejunostomy tube can also mean that for patients with inadequate intakes on discharge, overnight supplemental feeding at home is possible. Night jejunostomy feeding can help reverse malnutrition and allows for continuous entry of liquid nutrition into the upper gut, which to some extent mimics pyloric function and can improve maldigestion. As it is supplied in a continuous manner to pancreatic enzymes and jejunal mucosa, it avoids the periodical ‘flooding’ typical of a normally ingested meal in the TG patient.

Voluntary reduction in calorie intake due to anorexia, absence of hunger sensations and post-prandial abdominal discomfort occurs in many patients. The reduction in calorie intake may be drastic and is considered the main factor responsible for weight loss. Several studies have reported on severe weight loss which can be from 18kg-29kg post operatively and can continue for up to four years.

Bozetti,1 reporting on 44 disease free patients after a mean of three years after the operation, found that weight loss reaches its nadir by the 15th post operative month. This study showed that cancer free patients lose weight after gastrectomy. After 24 months these patients still had intakes far less than the recommended 35kcals/kg/day.

Gastrectomy patients have been shown to have an average of three eating related symptoms. Amongst the most frequently cited symptoms are:

Total gastrectomy can dramatically reduce the reservoir into which patients can eat (see Figure 1). ‘Small stomach syndrome’ can mean that patients become very selective in their choice of foods avoiding hyperosmolar, starchy and high volume foods.

Maldigestion after TG has been described as pancreaticocibal asynchronism. Factors increasing malabsorption after TG include:

Diarrhoea has been reported in patients within an hour or two of eating and arises from an increased intestinal transit. Bragelman2 reported on a 22% incidence of shortened intestinal transit in TG patients. Other factors implicated in its aetiology include a pre-existing disease such as coeliac disease, bacterial overgrowth and inadequate digestion and absorption of nutrients because of inadequate time for absorption. Patients with severe steatorrhoea can excrete fat in up to four times normal amounts.

Anaemia is one of the most common nutritional problems post TG and occurs in over three quarters of patients. Iron deficiency anaemia is usually caused by a reduction in intake. Also other factors include:

Bone disease occurs in 15%-30% of patients after TG. Poor dietary intake, reduced absorption of vitamin D due to fat malabsorption, impaired calcium uptake due to calcium soap formation with steatorrhoea, and bypass of the duodenum have been proposed as causes.

Dumping syndrome is extremely rare after TG. Early symptoms (30-60 minutes post meal) include hypotension and tachycardia, and are due to the rapid emptying of the gastric remnant into the jejunum.

Late symptoms (90-180 minutes post meal) are attributed to reactive hypoglycaemia following overproduction of insulin in response to rapid absorption of glucose. It is treated by limiting the amounts of refined sugars, and avoiding liquids with meals to slow down gastric emptying.

Several reports note that TG patients become progressively malnourished if they are not controlled with a nutritional follow up. Unpublished data from our unit showed that 60% of patients seen in OPD experience significant to severe weight loss.

Dietary advice centres on small frequent energy dense meals and snacks, supplementary nutritional drinks and good sources of iron, calcium and vitamin D.  Foods high in fibre should only be taken in small amounts to minimise satiety, fluids should be taken separately from meals to reduce satiety and patients should avoid filling up on nutritionally dilute food and fluids.

Intramuscular vitamin B12 is required and possibly a multivitamin and mineral supplement.  Form many patients proprietary products such as tasteless powered supplements of carbohydrate and protein can be prescribed and are very useful in increasing intake without affecting volume or taste.
To obtain an adequate calorie intake strict nutritional follow up should be started as soon as possible to avoid a sharp weight loss in the early postoperative course when the main dietary problems occur.

All rights reserved by INMO. Please don't use without permission