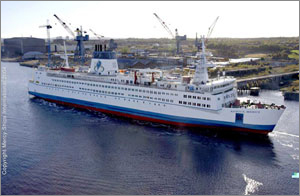 Mercy Ships, a global charity, has operated hospital ships in developing nations since 1978.

Following the example of Jesus, Mercy Ships brings hope and healing to the forgotten poor, mobilising people and resources worldwide, and serving all people without regard for race, gender or religion. Additionally $21 million of medical equipment, hospital supplies and medicines have been delivered during visits to 95 ports in 35 developing countries. Mercy Ships, now working in West African ports, welcomes volunteer nurses and doctors for two weeks, or more, who would like to give of their time, efforts and expertise to the work of bringing hope and healing to the poor.

Mercy Ships follows the 2,000 year-old model of Jesus: the blind see, the lame walk, the mute speak, and Good News (the nature and character of a loving God) is proclaimed and demonstrated among the poor.

Mercy Ships welcomes volunteers who would like to give of their time, efforts and expertise to the work of bringing hope and healing to the poor.

Short-term volunteers can participate from two weeks to a year with Mercy Ships, while others may choose to serve in a career capacity.

Research Survey for Midwives working in Maternity Services in Ireland

Grants for Nurses from Queen's Institute of District Nursing in Ireland

Nurses, Nurse Practitioners and Nursing Students are needed in Africa, Asia & the Americas